— Update 09/01: I’ve added some minor stuff I missed on the first publication of the blogpost: VMware Fusion and Workstation and Virtual SAN.

Recap of all major announcements

Both VMworld US 2016 general sessions are finished so al big announcements of this years edition are out in the open. This blogpost will provide a very brief and short description of all major announcements. Being responsible for the Hybrid Cloud practice of ITQ, you can expect a lot more detailed blogposts about the day one announcements coming soon 😉

Cloud Foundation is at the heart of the SDDC as a unified platform for both on-premises data centers as well as public clouds:

VMware announced a tech preview of a SaaS based collection of services for providing:

accros multiple (non-VMware) based clouds. Cross-Cloud Services provide a common operating environment for both (non-VMware) public clouds and on-premises workloads. It enables visibility into cloud usage and costs, it enhances consistent networking and security policies, and automates the deployment, management, and migration of applications and data across vSphere and non-vSphere private and public clouds. 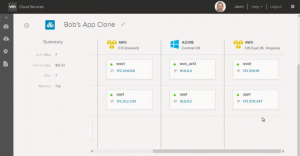 VMware showed a demo of a web server running in AWS being cloned to Azure for example. Arkin technology is also used as could be seen in the demo to provide insight in workloads running in multiple clouds. NSX technology is being used to provide security policies across clouds. Very, very cool and impressive stuff!

Hybrid Cloud Manager for vCloud Air is enhanced with a zero downtime migration capability. This feature was announced in Tech Preview last year. This means you can now migrate workloads seamlessly with zero downtime to and from vCloud Air.

IBM Cloud will be the first partner leveraging Cloud Foundation in its public cloud service.

VMware Horizon: Accelerating Performance with Up to 6X Reduction of Bandwidth

Enhancements have been made to Horizon:

Workspace ONE: Automated Provisioning for Office 365 and Consumer-Simple Registration

Enhancements to Workspace ONE enable administrators to automatically provision and de-provision end users based on existing active directory group membership for Office 365.

Not really and End User Computing product of you ask me but perhaps one of the most popular products in the VMware Community. VMware announced all users of the VMworld Mobile App would receive free licenses for either VMware Fusion or VMware Workstation products. VMware also announced versions 8.5 for Fusion and 12.5 for Workstation to be released September 7th. Both upgrades are available as free upgrades if you are running the current version of Fusion or Workstation. Upgrades are available for previous versions at reduced prices.

VIC, originally released as a container engine for vSphere is getting two enhancements in the form of two open-source projects called Admiral and Harbor:

The container engine of VIC is now managed by a Container Management Portal. The UI allows developers and app teams to provision and manage containers, including retrieving stats and info about container instances. Admins can use the portal for container host management and governance.

Harbor is an enterprise-class registry server that stores and distributes container images.

There is also a beta program available at http://learn.vmware.com/vicbeta

Not really a new announcement. Pivotal CloudFoundry running on top of Photon Platform as an integrated solution. This was announced a while back but this cloud native stack is GA now. 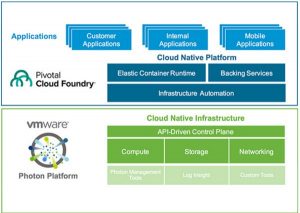 Not much info on this, just a short announcement by Kit Kolbert but the idea of integrating Photon Platform with Kubernetes and NSX is really cool. Can’t wait for more details!

VMware introduced the latest release of VMware’s OpenStack distribution now based on the OpenStack Mitaka release. New features include:

The most awesome NSX enhancement demoed at VMworld was the Microsegmentation Planner. vRealize Network Insight – with Arkin technology – is used to auto-detect traffic flows which are used to auto-create microsegmentation security policies for the Distributed Firewall. Awesome!

I only picked up on one new feature: data at rest encryption but I saw a slide on Twitter also mentioning Containers/Big Data and Analytics/Policies: 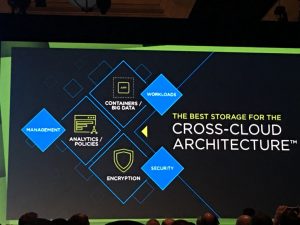 I will add more VSAN details tomorrow after replaying the keynote again in a more quiet setting. Unloading the dishwasher, entertaining my 3 and 6 year old and watching the keynote on a laptop screen is perhaps not the best combination.

Update 09/01: I finally got around to watching the VSAN part of the second day keynote. Here are the highlights:

As I picked up on before, VMware will add data at rest encryption for VSAN in a later release. VMware also mentioned VSAN will be the storage platform of choice for both Photon Platform and vSphere Integrated Containers. Finally, VMware demoed some very cool performance analytics for VSAN. The demo showed VSAN performance analytics proactively notifying the admin that a particular workload running on a hybrid VSAN cluster is expected to run in performance issues at a later time. The analytics engine made the recommendation to migrate the workload to an all-flash VSAN cluster. Instead of manually moving the Virtual Machine, the demo showed vRealize Automation being used to request a new storage policy for the VM. Cool stuff … can’t wait for the next release of VSAN!