VMware Any Cloud vision at VMworld 2017

If there was a single theme predominantly present at VMworld 2017, it is cloud. VMware has realigned its cloud strategy with the current market and it is very clear that VMware is no longer trying to compete with AWS, Microsoft, Google and IBM as a cloud service provider but instead, is repositioning itself as the neutral “Switzerland” of the cloud market. VMware sold its vCloud Air public cloud to OVH and is now targeting the cloud management layer with unique and innovative multi-cloud services. They are partnering with every major cloud provider: VMware Cloud on AWS, VMware Solutions for IBM Cloud, VMware Pivotal Container Services with Google, VMware Horizon Cloud on Microsoft Azure. The VMware vision now is “Any cloud, Any application and Any device” and they are executing rigorously on this renewed strategy and vision: 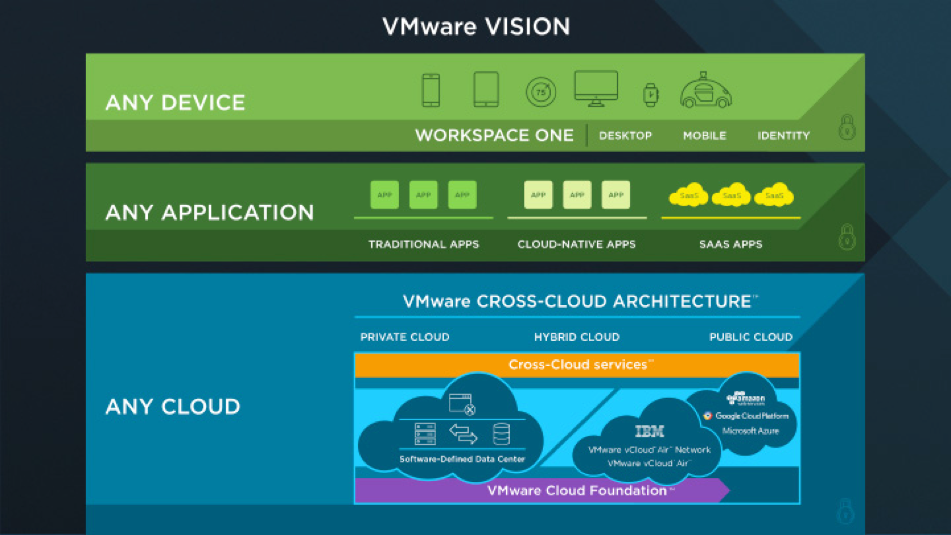 At VMworld 2017, several announcements were made within this “any cloud” space. One of the most anticipated cloud services is without a doubt VMware Cloud on AWS (VMC). At VMworld 2017, initial availability of this brand-new service was announced for the US West (Oregon) region. AWS was unmistakably present at VMworld 2017. VMware and AWS delivered dozens of breakout sessions about VMware Cloud on AWS and there was a huge AWS booth at the Solutions Exchange of both VMworld US and Europe covering all sorts of hybrid cloud demos and use cases:

VMware and AWS are partnering to deliver a fully managed VMware SDDC stack, straight out of AWS data centers. VMware manages the SDDC environment for its customers and the solution is consumed as a service. The SDDC environment delivery is fully automated and the service simply exposes a vCenter Server. This means customers can get a unified hybrid cloud environment up and running in no time. What’s really powerful and exciting about this new cloud service, is the possibility of integration with native AWS services:

This means you can seamlessly integrate legacy applications running in an on-premises data center with innovative AWS services. This also creates interesting use-cases within the Backup & Replication domain.

Nakivo VMware Replication for Instant Disaster Recovery creates and maintains identical copies of your VMs on target ESXi hosts. These target ESXi hosts could be running in VMware Cloud in AWS to create a very easy to deploy Cross-cloud DR solution. The copies, called VM replicas, are regular VMs that are available in VMware vSphere. This means that recovering from a disaster is as simple as powering on the replicated VMs in VMware Cloud on AWS. If the on-premises data center is running VMware NSX, the recovered VMs can even retain their original IP addresses.

Another option is to leverage Nakivo VM Backup to Cloud. Backup to Cloud allows customers to back up directly to the cloud or send VM backup copies to the cloud (such as AWS). This ensures backups are safe regardless of what happens to the on-premises infrastructure. This use-case can be very easily delivered through the use of a AWS S3 Storage Gateway. This is a simple appliance you need to deploy that allows exposure of S3 object storage in AWS using the NFS storage protocol.